Hello from the Writing Studio! 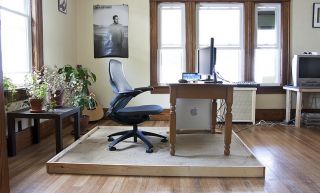 It’s been awhile, but the Craig Art House Writing Studio is up an running! I’m currently looking out at the lake and trees and wildflowers, feeling blessed and excited that I have the opportunity to write in a place like this. Of course that also creates a bit of pressure to write something worthy of the space–but we’re all in competition with our better selves, so bring it on!

When people find out that I’m a writer, inevitably they wonder if there is a certain music or soundtrack that I prefer to write to. If I like to write in the morning or evening or under a full moon or every other Tuesday and Thursday. Basically, they want to know my routine. And I hate disappointing them when I say I don’t have one.

But as many of you understand, for a long time I had a 9-5 to pay the bills while I wrote on the side. I would use my lunch breaks to write for 30 minutes. I would write on the bus on the way to and from work. After I was promoted, I even started setting up fake meetings to give myself 30 minutes here and there to write more–which I don’t recommend. My boss was very understanding. Many bosses aren’t.

You see, I had inadvertently trained myself to write whenever I sat down to do it. But it wasn’t an overnight achievement. It took weeks of daily effort for that to happen. In the beginning, I would just sit and stare at a screen for 10 minutes before giving up and googling the Spanish royal family to find the missing link between them and my ancestors.

But I want to try and connect with people and share my love for writing, so for the next several weeks, I’m going to try and make an ultimate writing playlist. I’m going to listen to different songs as I work on my books and and see how they do.

So we’ll start that next time. But for now, I can give you a list of things that I have already tried that I know don’t work for me. However, they may work for you, so don’t let this list stop you from experimenting:

What do you think? Do you have a favorite writing/working playlist? Put in the comments below and I just might give it a try!